In the early 1980’s fifteen like minded bikers, who were tired of what the motorcycling scene in Leicestershire had to offer, or rather what it did not; decided to form their own back patch club. 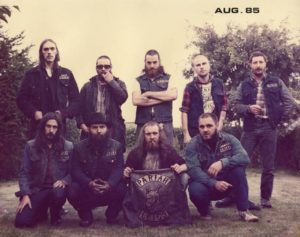 Although there was already a back patch club in Leicester city itself they chose not to join this club as in their opinion the members failed to meet the standard commitment to motorcycles and brotherhood that they had set for themselves. The original fifteen bikers held their weekly meetings above a hardware shop in North Evington, Leicester where it was decided that before any kind of back patch was worn, they would all prospect for a whole year as a club to determine the commitment to the cause.

At the end of this period only eight men remained. They chose to wear a black and white patch with a central Vikings head. In September 1984 their club, known as the “PARIAH MC LEICS” was born The weekly meetings continued and where held at members houses until 1986 when the Pariah purchased their first clubhouse, which they still use today. 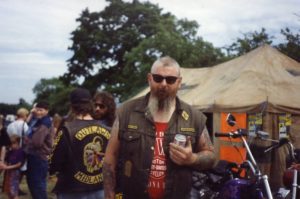 In between 1984 and 1986 the remaining back patch clubs in Leicestershire were dispersed and the reputation of the Pariah went before them. It was at this time many alliances were constituted with other back patch clubs in and around the East Midlands area. These clubs where: 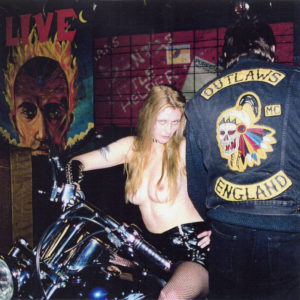 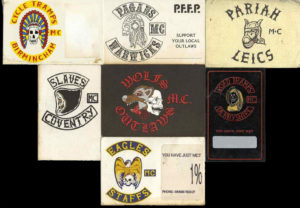 Several years on, as the mutual respect for each other had strengthened it was concluded that an amalgamation of all the midlands back patch clubs should take place. The amalgamation officially took place on the 17th July 1992 and they were known as the “OUTLAWS MIDLANDS MC“. Nine former Pariah members and one prospect became the Leicester chapter of the Outlaws Midlands mc.

Throughout the years the Outlaws Midlands continued to take on other back patch clubs from around England and Wales, therefore they they decided to re-think the “Midlands” bottom rocker, changing it for an England one after taking on four more chapters: 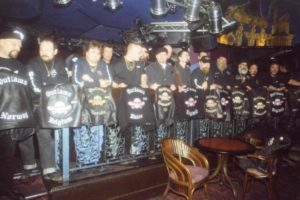 After several years using the yellow and black patches and a strong friendship with the “Outlaws MC” in America, Canada and Australia the Outlaws England and Wales became fully fledged members of the “American Outlaws Association” with the patch over taking place in Febuary 2000 at the Valentino’s Club. Over time the Outlaws have continued to expand throughout the world taking on chapters from all areas in Europe and Asia.

Any cookies that may not be particularly necessary for the website to function and is used specifically to collect user personal data via analytics, ads, other embedded contents are termed as non-necessary cookies. It is mandatory to procure user consent prior to running these cookies on your website.